Food is one of two things: either it is your medicine that heals you, energises you, supporting your immune system, enhancing your sleep quality, or food is your poison by disintegrating you, stopping you from feeling good, effecting your sleep or being the basis from which disease starts. Vandana Shiva’s book ‘Oneness’ suggests that 50% of the greenhouse gas submissions result from commercial farming, chemicals, pesticides and destruction to the planet. This has also been stated by many environmentalists worldwide. We are living in a time where our government organisations are no longer for the people or by the people, but is simply a corporate headquarters where the super rich people of the world use money to bend laws and remove laws that protect us and nature. Instead, their policies only fill their pockets with money, typically destroying nature, decreasing our health and taking our freedom. We can change this by not putting money in their hands and by changing consumer demands which they will have no choice but to follow. People who understand dis-ease, inflammation and illness will know that these are caused by nutritional deficiency and/or excessive toxins – not viruses and bacteria; hence these people hardly ever get sick. It is important to remember that one size does not fit all.

When you eat sugar, you set off a series of metabolic pathways that push the body to use more of its resources. A very simple experiment anyone can undertake in order to understand the truth about viruses is to do the following experiment: Buy 4 chocolate bars (non-organic, the more sugar and ‘natural flavours’ and other chemicals in the ingredient list the better). Eat them all, one after the other. Pay attention to any flu-like symptoms you develop within minutes (usually starts with congestion, runny nose) . Notice how ‘deadly’ your stools will be the next time you pass a bowel movement. Now, if you want to ‘catch a virus’ completely, eat another 4 chocolate bars the next day. Soon you will ‘catch a virus’. However, it will become clear to you that you did not catch anything – you were simply poisoned. Every different kind of poisoning creates unique but often similar symptoms. 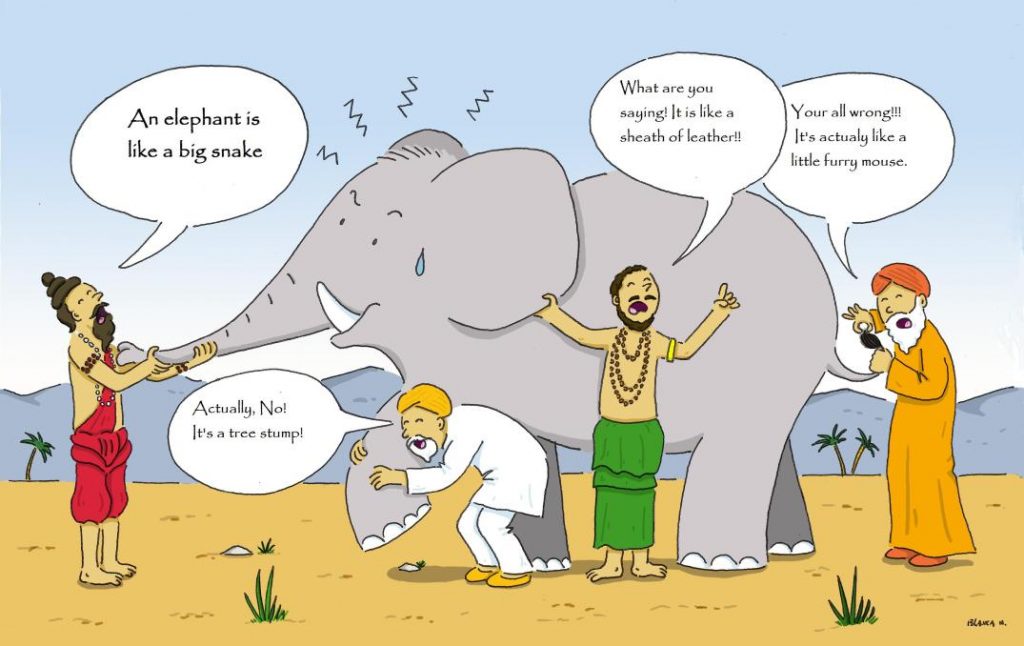 Doesn’t the picture of the blind men and the elephant also point to something bigger — The elephant? Indeed, each blind man has a limited perspective on the objective truth, but that doesn’t mean objective truth isn’t there. In fact, truth isn’t relative at all… It’s there to discover in all its totality. In theology, just because we have limited access to Truth, that doesn’t mean any and all versions of Truth are equally valid. Actually, if we know the Whole Elephant is out there, shouldn’t this drive us to open our eyes wider and seek every opportunity to experience more of Him?

A 2016 research paper stated: “What then ensues is a long, passionate argument filled with heated dispute amongst these learned men which gets them nowhere. Although each is partly right, none of them has seen the whole picture (while learned, they are blind, after all!). This fable has been utilized in many different eras and many different cultures to recount arguments in areas as diverse as theology and politics. It illustrates the inaccuracy of seeing only a part of a subject and assuming that it is the whole. It is a cautionary tale that even learned men can sometimes be misled by their preconceived notions or only seeing a portion of the whole.

In the complex world of nutrition and particularly in the study of how the foods we eat relate to such chronic conditions as obesity, diabetes and cardiovascular disease (CVD), we are somewhat like the six blind men. Each of us sees a part of the complex puzzle and may assure our colleagues that, in fact, we have solved the entire riddle for how nutrition relates to various disease processes.

The scientific and medical communities have gone down the road of speculating cause and effect without conclusive evidence many times. We blamed salt consumption for contributing to hypertension [1], yet recent evidence suggests that this relationship is far more complex [2,3]. We blamed dietary cholesterol for contributing to heart disease and warned a generation of Americans to avoid eating egg yolks, although that advice has subsequently been found to lack scientific justification [4].

The latest bête noire in nutrition is sweeteners, whether they be nutritive sweeteners, in general, and fructose containing sugars, in particular, or non-nutritive sweeteners (NNS). With the issue of sweeteners, the scientific community faces the problem of trying to offer advice without seeing the totality of the picture, much like the blind men approaching the elephant. It is time to pause and try to see the entire elephant.1″

If you are poisoned by food, water or air (or vaccines or pharmaceutical drugs), your body must attempt to cleanse itself. It does so by developing inflammation wherever the poisoning has occurred. The inflammatory response attempts to flush out the toxins with:
– coughing them out (consider cigarette smoke contamination – cigarettes are a form of poison; smoke too much and you eventually die).
– breathing them out or sweating them out (think of the alcohol you smell on a drunk’s breath – alcohol is a form of poison; drink a little too much and you eventually die).
– runny nose, sneezing, urination and defecation (diarrhoea – think of the side effects of prescription drugs – and if you take too many you will die from an ‘overdose’).

The majority of food is poisoned with:

1. ‘Natural flavours’ which are chemicals , unknown by the consumer. (Read ingredient lists)
2. Refined sugar such as sucrose, dextrose, maltodextrin, and so on.
3. Random non-food chemicals such as ‘sodium benzoate’, or other words that are things that dont grow in nature, and that you don’t know how it effects your body.
4. Pasteurised milk (dead milk).
5. Low-fat products.
6. Toxins in body care products.
7. Caffeine (a poison – try drinking a few cups in a row and see what happens to your heartbeat, and your anxiety levels. Try cutting coffee out and see how bad your brain becomes inflamed as your body begins to cleanse the accumulation of toxins that built up there from coffee).
8. Electromagnetic radiation (yes, 5g included).

If you logically wonder “why do several people get sick together in one household?”, this is for several reasons:

1. Families often get poisoned by the same sources, especially by toxic food and bodycare products. Also, families share stress together, because you cannot easily avoid energetic influences when sharing life so intimately.
2. Just as with women, whose menstrual cycles line up when sharing the same space, so too do the bodies cleansing schedules or triggers of cleansing. If 3 of 5 people in a household have accumulated toxins, they will all get ‘sick’ together and cleanse. This is efficient with regards to survival. The 2 who dont ‘catch the invisible virus’ had no need to cleanse.
What about those random occasions when grandparents visit sick grandkids, and then get sick too?
Often, when a family gets together, they poison themselves. In our culture, it is common to eat ‘fun meals’ as a family when visiting. Birthday cakes? Most are utterly toxic, but its a cultural ‘norm’ that has yet to be healed. Ice cream? Its not even food – its dead milk laced with sugar and artificial flavours. So the grandparents come, and everyone eats sugar, gluten, chips, chocolate, or fast food of some kind, and drinks alcohol, and coffee, etc. Then they’re sick afterwards, and decide they must have caught a virus -just like the kids. This does not always happen though – many times people will visit, and someone is sick or the grandchildren are sick, and no-one else gets sick too.
Noone ‘catches’ anything.
Firstly it was understood that sugar drains vitamin C out of your body.
Studies have found that excessive amounts of sugar, or glucose, in the body can inhibit the absorption of Vitamin C. In the 1970s, researchers established that sugar and Vitamin C have a similar structure and enter cells using the same GLUT receptors.
High glucose levels inhibit vitamin C from entering our cells, and decrease absorption rates. Researchers have found that reduced sugar intake may improve vitamin C levels as well as its benefits.
Vitamin D
The metabolism of a type of sugar fructose, increases the production of an enzyme which breaks down stores of vitamin D. It can also undermine the production of another enzyme necessary to synthesize vitamin D. A shortage of Vitamin D can lead to a suppressed immune system and numerous health problems, including certain cancers. It’s now estimated at least 75% of people in western countries are deficient in Vitamin D, consuming excess sugar alongside depleted Vitamin D could explain why we experience such high rates of bone, teeth, and immune issues.
MAGNESIUM
The high blood sugar and elevated insulin levels associated with excess sugar intake decrease magnesium absorption and cause the kidneys to excrete magnesium faster. Since magnesium is key in stabilizing blood sugar, a vicious cycle commences.
As blood sugar regulation is impaired even more magnesium is excreted. Cutting the sugar helps ensure that magnesium, critical for a plethora of bodily functions, is absorbed and maintained.
CHROMIUM
Chromium, like magnesium, is involved in blood sugar regulation. Depletion of chromium contributes to decreased glucose tolerance, a precursor to diabetes. Like with magnesium and calcium, high sugar consumption promotes chromium excretion. Some data suggests consuming a diet consisting of 35% simple sugars increased natural excretion rates by 300%. If you consider a western diet, you will notice that the majority of us consume 80% per day in simple sugars. When you remove sugar from your diet, you feel your body recalibrating.
President John F. Kennedy who quoted Winston Churchill who, in turn, had paraphrased the philosopher George Santayana by saying “Those who fail to learn from history are doomed to repeat it”.

Paul Leedertese – “It’s in a tear”