The man who knows all can learn nothing…

Home/The man who knows all can learn nothing…
Previous Next

The man who knows all can learn nothing…

We are filled with fear, anger, confusion and most importantly hope at this time in life. I am going to tell you a story about two men, Louis Pasteur and Antoine Beauchamp’s and their relevance to where we are today. These are strange times and the same conflict that was upon these two men in the 1800’s is with us now.  Louis Pasteur gave us the germ theory, the idea being that all germs are bad. Now he had good reason behind this. This is because the cows at that time were living in swill country, meaning next to distilleries. They inhabited dirty rank conditions and were feeding on dirty water and waste. Hence the milk they produced was infected thus killing many babies and making people at that time seriously ill. Now Pasteur invented pasteurisation to kill the germs in the milk, hence no one got ill. By sterilising the milk we can actually use this contaminated milk as we do today. At that time sourdough bread and yoghurt made people ill. Of course it is a different story today.

Western medicine is now based on the same theory, where all germs, including bacteria and viruses, are the cause of all disease and illness. 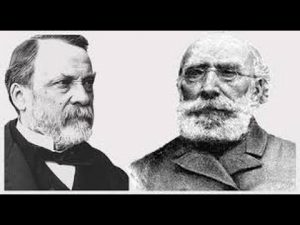 Let’s look at the evidence. So I am all for cleaning up, sanitization and using soap and water to wash my hands. There has been a large decrease in serious infection, disease, illness and death in societies where there is poor hygiene, poverty and depravation. I have seen this for myself in India, when drains, proper sewage disposal and good water supplies were installed, along with improved sanitisation methods.

However in the west we can over do it. One medical research paper tells us that children who were exposed to bleach all the time in schools had higher respiratory infections due to constant sterility. We know that our microbiome works in a relationship with our germs and organisms in order to build our immune system. Children who go through a natural birth have swallowed vaginal and foecal matter and that is the start of their immune system. Children who undergo a C-section have a higher risk in life for immune system problems. Neither  natural child birth nor C-sections are right or wrong – this is not a judgement. 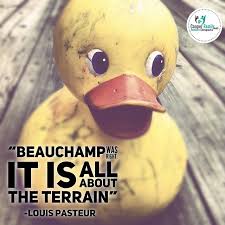 Germs and viruses actually establish the immune system. Another study showed that houses that use sponges rather than dishwashers were likely to have a better immune condition. Hence the germ versus terrain is still in conflict today. This is also known as Claude Bernard’s  ‘cellular  theory’. Claude Bernard was responsible for a major breakthrough in understanding the fundamental principles of organic life, one that is valid still today. It is his concept of “homeostasis”, or controlled stability of the internal milieu, or internal environment, of cells and tissues. He proposed that “the fixity of the internal environment is the condition for free life”, and explained that:

“The living body, though it has need of the surrounding environment, is nevertheless relatively independent of it. This independence which the organism has of its external environment, derives from the fact that in the living being, the tissues are in fact withdrawn from direct external influences and are protected by a veritable internal environment which is constituted, in particular, by the fluids circulating in the body.”

So this goes onto to tell us that germs and viruses are normal in the body. Dis -ease only happen when the body is not in homeostasis, synchronisation and ill at ease (dis ease) . Hence we get some sort of inflammation in order to combat the situation. Rural communities and tribes such as the shamans and native Indian Americans look at the emotional, physical, energetic and vibrational state of the body.  Indigenous communities live with gratitude, consciousness and awareness.  Having the ability to connect with the natural world, having good relationships with ourself, others and Mother Earth is always reflected in our health. When things go wrong emotionally, physically and mentally our ancestors would tell us that we are in conflict with the planet plus ourselves and others. There is much research on this from ‘The Institute of Heartmath’.

Natural remedies are things such as sage and thyme, which have many medicinal benefits. Dandelion including the root, leaves and flower helps detoxify and is what’s known as a bitter. A bitter increases bile which will bind any type of toxin. Other natural remedies are elderberry and mushrooms. 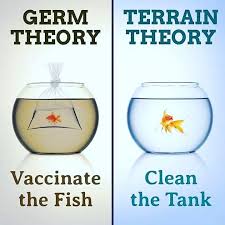 Now back to Beauchamp, he advocated the persons’ diet, lifestyle, health practices, exercise and fresh air to kill the virus and germs. Beuchamp noted that the germs that Pasteur feared are opportunists and prayed on poor quality tissues and poor health when the right choices were not chosen. Hence the terrain theory using nutrition, hydration, movement, sleep, managing stress and thoughts. Hippocrates had also cited this years before with the three doctors:  diet, quiet and happy.

The bitter rivalry between Beauchamp and Pasteur continued for years. The irony is that  towards the end of his life, Pasteur renounced his gene theory saying Beauchamp had been right all along.

“Le microbe n’est rien, le terrain est tout.” (The microbe is nothing, the terrain is everything) –The last words of Louis Pasteur (Father of the “Germ Theory” of disease)

The problem with killing the germ theory is that as soon as one germ is killed, another will start as nothing changes in the environment and terrain. The immune system is everything and this can clearly be seen when comprimised during radiotherapy and chemotherapy treatment. Pharmaceuticals were always meant as a temporary measure and of course have their place. 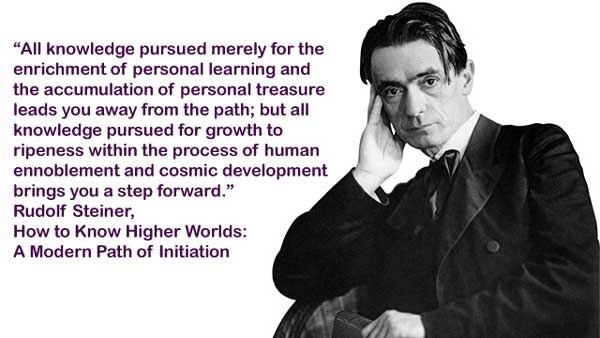 More than a hundred years ago, Rudolf Steiner wrote the following:

” In the future, we will eliminate the soul with medicine. Under the pretext of a ‘healthy point of view’, there will be a vaccine by which the human body will be treated as soon as possible directly at birth, so that the human being cannot develop the thought of the existence of soul and spirit.
To materialistic doctors, will be entrusted the task of removing the soul of humanity. As today, people are vaccinated against this disease or that disease, so in the future, children will be vaccinated with a substance that can be produced precisely in such a way that people, thanks to this vaccination, will be immune to being subjected to the “madness” of spiritual life. He would be extremely smart, but he would not develop a conscience, and that is the true goal of some materialistic circles.
With such a vaccine, you can easily make the etheric body loose in the physical body. Once the etheric body is detached, the relationship between the universe and the etheric body would become extremely unstable, and man would become an automaton, for the physical body of man must be polished on this Earth by spiritual will. So, the vaccine becomes a kind of arymanique force; man can no longer get rid of a given materialistic feeling. He becomes materialistic of constitution and can no longer rise to the spiritual “.