Scientists and body workers alike agree there is a definite jaw and hip connection. This is what it’s important to assess the body holistically, looking away from the pain to other areas of the body.   The alignment of the jaw can strongly be mirrored or opposed in the pelvis and vice versa. Embryology shows us that at about day 15 in a phase called gastrulation there are two depressions that form on an embryo. One becomes the oropharyngeal membrane that eventually forms the mouth and the other is the cloacal membrane that eventually forms the openings of the urinary, reproductive and digestive tracts.

They remain connected even as the spine develops and grows, creating a greater space between them.  A 2009 study in the Journal of Manipulative and Physiological Therapeutics from Hanover Medical School in Germany concluded that temporomandibular joint dysfunction plays an important role in the restriction of hip motion experienced by patients with complex regional pain syndrome and this indicated a connectedness between these two regions of the body.

Why is this important to the human form, let alone pilates and yoga?

Pilates and yoga foundations are breathing. If you are not breathing correctly, you can do umpteen breath or meditation exercises, but the bigger picture should be looked at if possible. Have you experienced having too many teeth in your mouth and had them removed as a child or teenager, or have you worn braces? If so, this would have been due to the size of your upper and lower jaw, where the jaw had not developed enough to hold all of your teeth. Removing teeth and wearing braces is fine as it treats symptoms, but on the other hand, it does not address the root cause. Our craniotomy facial contains the airway passage.  The maxilla, also known as the upper jaw, is a vital viscerocranium structure of the skull. It is involved in the formation of the orbit, nose and palate, holds the upper teeth and plays an important role for mastication and communication.  It constitutes the roof of the mouth and floor of the nasal cavity.

When we have improper jaw growth, this is due to poor diet and hereditary/dietary factors. New research from the University of Kent suggests that many of the common orthodontic problems experienced by people in industrialised nations is due to their soft modern diet causing the jaw to grow too short and small relative to the size of their teeth. I particularly noticed various shopping habits during lockdown while in the supermarkets, where the ready meal and convenience food isles were the first to sell out.  Chewing particularly effects the shape of our lower jaw, so if we are living on easy digestible soft foods that are quick to eat and digest, we are not optimally eating. Cooking from scratch is time consuming, but when we realise how much time we actually spend doing other things such as surfing the net on computers, phones and iPads or watching tv, we do notice that we have an abundance of time and we don’t always spend it wisely. It goes back to our choices that make and shape our body. 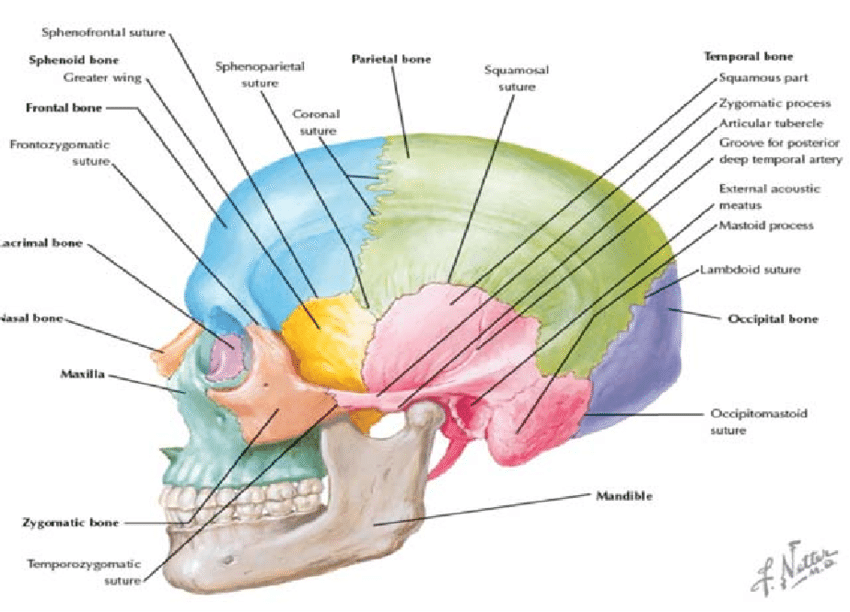 The University of Kent study by Dr Noreen von Cramon-Taubadel from the School of Anthropology and Conservation, tested the long-debated theory that the transition from a largely hunter-gatherer to an agricultural subsistence strategy across many parts of the world has had a knock-on effect on the growth and development of the human skull and lower jaw.

Dr von Cramon-Taubadel compared the shape of the cranium (skull) and mandible (lower jaw) of 11 globally distributed populations against models of genetic, geographic, climatic and dietary differences. She found that lower jaw shape, and to some extent the shape of the upper palate, were related to the dietary behaviour of populations, while the cranium was strongly related to the genetic relationships of the populations.

In particular, the lower jaw reflects whether populations are primarily hunter-gatherer or agriculturalist in nature, irrespective of what part of the world they come from. This therefore suggests that chewing behaviour causes the lower jaw to grow and develop differently in different subsistence groups, while the skull is not affected in the same way.

Overall, the hunter-gatherer groups had longer and narrower mandibles, indicating more room for the teeth to erupt correctly, while the agriculturalists had generally shorter and broader mandibles, increasing the likelihood of dental crowding.

This is not new news, as this was found by Weston A. Price, a 1930’s orthodontist.  Dr. Price documented this ancestral wisdom including hundreds of photos in his book, Nutrition and Physical Degeneration. He showed the importance of whole food nutrition, and the degeneration and destruction that comes from a diet of processed foods. Further, we need a diet rich in fat soluble vitamins, as they can effect our genes. This would be vitamin A,D and K2. 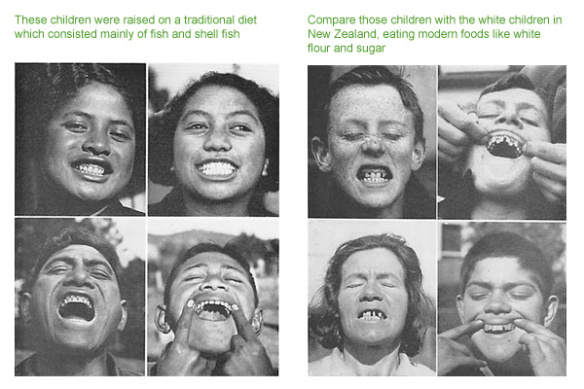 When we have a diet loaded with white carbohydrates and sugar, we will mouth breath because of the effect on the central nervous system. We can retrain ourselves to nose breathe. Nasal breathing helps maintain the upper jaw and connection of the tongue to the roof of the mouth, forcing us to nasal breathe. Our tongues are incredibly strong and are connected to other areas outside of the mouth. This means that what you do with your tongue, including how you rest it, can affect the entire body. Bad tongue posture can have a negative effect on your eyes, nose, head, neck, shoulders and of course, teeth. This is largely because the tongue is connected with cranial nerve 7. Our sleep postures represent our daily postures.  Improper tongue posture can contribute or lead to mouth breathing showing symptom such as :

If you wake up with dry mouth and are teeth grinding all the time, it’s the brains response to pull the tongue out of the way in order to clear the nasal passages. Weston A. Price found that hunter gatherer tribes had well balanced faces and skulls. Yet children and adults today, myself included, tend to have longer profiles. On facial dissections the tongue is linked right down to the feet. If you teeth grind and you wear a mouth guard, you are treating symptoms and not the root cause. The immune system of the nasal microbiome is linked to the lung microbiome. The slower and less we breathe, the healthier you become. Eating the correct nutrients stimulates saliva, and this manages the oral systemic connection.

It is well recognised that the state of our mouth is a reflection of our health and gut. The gut starts at the mouth and finishes at the anus. The gut microbiome is recognised as important player in combating inflammation throughout the body. Curious to find out more on your breathing pattern jaw occlusion and diet? get your self booked in for a full CHEK consultation with me.