Dr. James Wanless is known for his alternative views of the tarot and life. He has studied Jungian archetypes and behaviour in great depth. Although I am a sceptic on the average tarot reader and crystal ball reader. I certainly changed my mind when I heard the amazing interview with James and Paul Chek. I have so many friends and colleagues who rush off to have their palm read, tea leaves read, fortune read etc But what so many of us are doing is relying on someone else to predict our future. Abraham Lincoln, Dr.Wanless like Dr.Chatergee and Paul Chek clearly states that we all need to take responsibility for ourselves. We need to have purpose, goal, dream and legacy and create our own future rather than getting someone to predict it for us. Every time we point the finger at someone else there are three pointing back at us.

We are brought up through protocols of relying on others to fix us, heal us and seldom do we like to take responsibility for own choices. This is called transactional analysis developed by Eric Bernes. Based on his observations of people in his own clinical practice in the 1950s, the psychologist Eric Berne developed the idea that people can switch between different states of mind—sometimes in the same conversation and certainly in different parts of their lives, for example at work and at home.  He found that these states of mind aggregated into three types, which he christened. 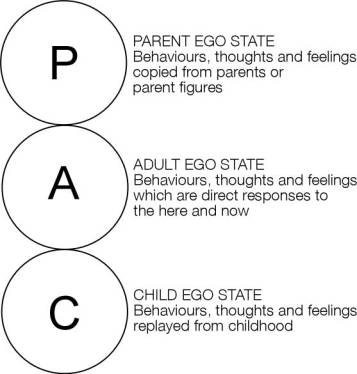 Parent, Adult and Child is what we play when we visit any sort of medical person or therapist, most of us  play the child relying on the therapist to fix us. I have never encountered a bad physiotherapist or surgeon, yet many of us expect and not always our own fault for them to take responsibility for the outcome.

The Child state consists of parts of us, which hark back to our childhood.  It is childlike but not childish.  In this state “reside intuition, creative and spontaneous drive and enjoyment”.

The Parent state reflects the absorption over the years of the influences of our actual parents and of parent and authority figures such as teachers, bosses and so on.  It has two functions.  One is to enable people to be better actual parents of their children.  The other is to enable many responses to life to be made automatically—“that’s the way it’s done”—thereby freeing the Adult from making innumerable trivial decisions.

The Adult state is where we hope to be as adults.  It is our adult selves, dealing with the vicissitudes of everyday life.  It also has the function of regulating the activities of the Parent and Child, and mediating between them.

Berne used this model of the personality to inform his theory of transactional analysis, which is just the study of the transactions, the communication, and the relationship between people.

So what exactly are archetypes and how can we understand and create a better future? What does this have to do with a yoga or pilates class?  Our body and the universe is always talking to us, its whether we are  willing to listen and receive. Its whether we are willing to change our behaviour and habits. Getting back in touch with our body can be a difficult task when we are so tired, busy and stressed.

We can learn from challenges in our life whether they be physical, mental and emotional. Each physical ailment we create in ourselves is an opportunity to mange our creative self. When we get injured, hurt or suffer illness we are being guided to people and places who will give us different directions to take creating new possibilities. When we go for skilled help we need to keep an open mind. The number of people with ailments that see people like myself will sit there and argue or disagree and more importantly they won’t follow the program or protocol and hence won’t get results. This is the very nature and dogma that keeps us stuck in the same behavioural pattern. These people continue to seek yet more experts and more doctors and stay on the magic roundabout of pain and suffering. This is an opportunity to look at our choices, of course we do need help and guidance and we can then look at the people we are seeking advice from. Are they a picture of good health, intelligence and choices?

So can we create our future?

Still,  I know many of you will be thinking, sure, for someone as successful as the former President Lincoln, it’s easy to say that the best way to predict the future is to create it. But did you know that Abraham Lincoln, for a large part of his life, considered even himself a failure? He failed far more than he ever succeeded in life, but people don’t remember him for the failures, they remember him for the successes.

Let’s look at just how many times Lincoln failed in his life but was still able to hold fervently to the notion that anyone could predict the future by creating it:

So, someone who failed in business, and early on in professional politics, still believed that you could predict the future by creating it. Of course, this is the same man who was elected to the office of the President  of the United States in 1860, self-studied his way into the law profession and eventually aided in abolishing slavery.

Lincoln learned that failure can teach you humbling lessons in your life. It’s because of his early failures that he was able to achieve so much later on. There was a deeper purpose there, something else that was driving him that allowed him to predict his future by simply creating it. It all became crystal clear to him. That mentality didn’t set in right away; it happened over time. I am always saying there are no ‘Winners and losers” but ‘Winners and learners’.

The Best Way To Predict The Future Is To Create It