The Art Of Forward Bends

The Art Of Forward Bends

“Fold from the Hips, I’ve told you three Times” my Guru shouted while I stood on a rooftop in Puri.”But I’m trying”, i replied, was I being lazy, in and a Beatles trance from the 60’s or just not listening, or was it something else entirely?

The ability to perform a yoga pose or movement pattern is determined by our joint mobility and stability, including the muscles contractile state, the length and/or tightness of the capsuloligamentous structures and the bone shape-or a combination of these factors. This is why some of us will be more prone to injury than others, and some will have more facility and others not.

So I would like to bring your attention to the art of forward bends, we all blame the tightness in the lower back and the shortness of the hamstrings, but are these the main key factors or is it something else? Lets look at the pelvis and the ability to tilt it forward and backwards, as we do a posterior tilt the femur heads roll away the ASIS and as we do an anterior tilt the femur heads roll towards from the ASIS.

So trying this movement in different planes and positions will be different to everyone. As with most asana and movement work we get carried away looking at muscle actions, origins and insertions within. We forget that the body works as a kinetic chain, a myofacial web, our forward bends are determined with what’s going on above and below the major joint too, not just physically but mentally.

Our ability to switch to the left side of the brain ,the parasympathetic side and let go, is most important when surrendering or releasing into forward bends. Our breath also plays a big role, the relationship between breath (prana/apana) and posture (sukha/sthira) `.

Try experimenting using both an inhale and exhale as you go into a forward bend and see what the results are .In a nut shell it’s said that Prana flows up and Apana down, but we need to be able to work Apana upward and downwardly in order to expel lung gaseous .This is also why any inability to reverse apanas downward push will result in an incomplete exhalation.

“The ability to reverse apana’s downward action is a very basic and useful skill that can be acquired through yoga training, but it is not something that most people can do right away. Pushing downward is the way that people are accustomed to operating their apana because whenever there’s anything within the body that needs to be pushed, humans tend to squeeze in and push down .This is why most beginning yoga students, when asked to exhale completely, will squeeze in and push down they’re breathing muscles as if they’re urinating or defecating.”Yoga anatomy Leslie Kaminoff.

I follow with some examples now of a free flowing body and bodies with limited restriction .These are just examples of one pose and there are many further variations that I could add. Also as I’ve mentioned previously, what s going on above and below also contributes to the final asana. So next time you do your forward bends ,don’t just blame the hamstrings and lower back, look at the bigger picture and think about the pelvis and its ability to move on those femur heads. 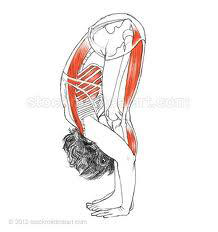 We can see in fig 1, that the plumb line and line of gravity goes through all the correct joints. Particularly looking at the Yogis ability to tilt the pelvis and roll the heads of the femurs toward the ASIS with ease and no discomfort. They are releasing the hip flexors and lower back and breath can clearly flow into the upper area of the back and shoulders. 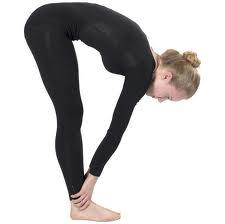 We can see clearly in fig 2,a different body type, the result being the weight is being thrown slightly back and behind due to tight hamstrings ,tight spinal muscles and most importantly the pelvis inhibition to tilt backwards this reducing the femur heads ability to roll towards the ASIS. 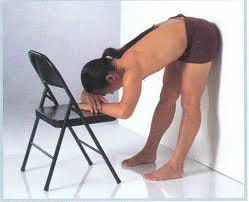 In fig 3, an option to do this pose with ease would be to make it passive by using props such as the wall and chair fro support. The yogi can now draw their shoulders away from their ears ,keep openness in the chest area and keep their breath flowing, and release the force or pressure to the lower back caused by the inhibition of the hip flexors. 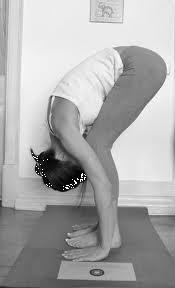 In Fig 4 we can see how the Yogi has bent the knees to allow space in the hip joints and allow the spine to release, the downside of this is the hip flexors are now working isometric ally so the dominance of the rec fem,psoas will now grip. I would still work this pose but change the body to different plane of motion and perhaps work supine using props to achieve the full benefit.