“Give us our daily bread” – Deuteronomy.

That’s does not include the pastry isles like croissants and cinnamon rolls. Then add the breakfast cereal aisle, which is loaded from bottom to top.Then the aisle loaded with pasta, spaghetti, lasagna, penne, and green spinach pasta, egg noodles. Now go to frozen foods and read the ingredients on the box, wheat is in so much stuff. 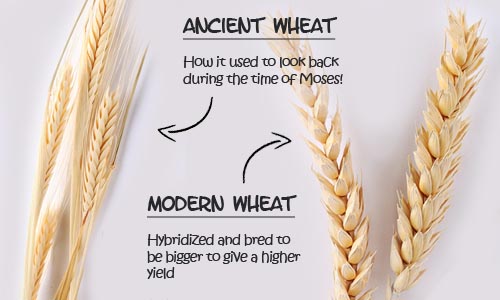 If your not losing weight and yet you feel your eating healthy and exercising it could be the wheat in your diet. Animals and humans are not designed to eat grains in the way they are produced now, it causes an inflammatory response. Cows are supposed to eat grass, yet are fed grains such as barley and some are even soaked in molasses to give the meat a redder colour. So we get the inflammation in our body through the food chain as well as other sources.

Once upon a time, an individual weighing 17 stone was a rarity, now its a common site among men and women walking the streets, as humdrum as selling jeans at Gap. Obesity is now crossing everyone from retired people right done to young children. Everyone is getting fatter, no demographic has escaped this.

Many overweight people are actually very health conscious. Most of us would presume that these people are taking big gulps, eating pop tarts and watching TV all day. In fact, most will tell you that they do some sort of exercise five times a week and have cut fat from the diet and eat healthily and are not sure why they are gaining weight and losing the existing weight.

Look at the person’s food chain, its called wheat belly. There is not an organ unaffected by wheat, but wheat’s impact on the waistline is most visible and has defining characteristics.

A wheat belly comes from years of consuming foods that trigger insulin, the hormones of fat storage. While some people store fat in their buttocks and thighs, most people will collect the fat around their middle and waste. This central or visceral fat is unique. Unlike fat in other body areas, it promotes inflammatory phenomena, distorts insulin responses and issues abnormal metabolic signals to the rest of the body. In the unwitting male wheat belly also produces oestrogen, creating man breast. 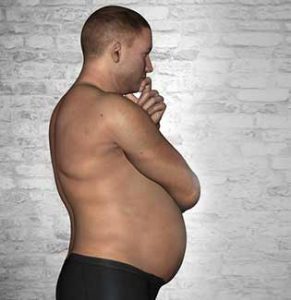 The consequences of wheat are not just in the outer body of superficial fascia layer; they reach right down into every organ of the body and envelope themselves in around every muscle. You see it go right from the intestines, liver, heart, and thyroid gland and right up to the brain.

How did we get there?

The national trend to reduce fat and cholesterol intake and increase carbohydrate calories has created a peculiar situation in which products made from wheat have not just increased their presence in our diets, they have come to dominate our diets. For most people every single meal contains some wheat course, it may be the main course, starter or dessert.

Wheat has become the national icon of health we are told to eat more “whole grains’. The sad truth is that wheat is the dominant source of gluten protein in the human diet. Most people don’t eat as much barley, spelt, triticale, bugler, Kamut and other less gluten containing foods. Wheat also has other attributes that the others don’t have made it especially destructive for our health. 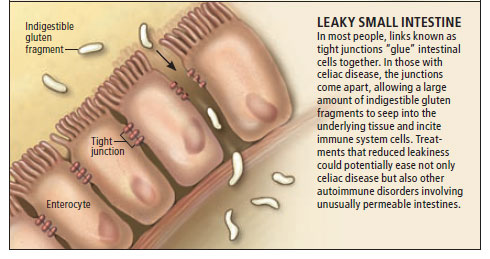 For many, the idea of removing wheat from the diet is at least, psychologically, as painful as the thought of having root canal treatment without anaesthesia. For some, the process can uncomfortable side effects like withdrawing from cigarettes or alcohol.

The bottom line is eliminating the wheat will make you sleeker, smarter, faster and happier. Weight loss, in particular, can make proceed at a pace you did not think possible.

A snicker was 41 so far better than the wholegrain bread

The glycemic index (GI) measures how quickly the carbohydrates in a particular food item convert into glucose, thus raising the body’s blood sugar level. Pure glucose, with a GI of 100, is the reference point with which other food items are compared and ranked on a scale of 0 to 100. The extent to which a particular food increases blood sugar most efficiently, it made sense to me that the quickest and simplest way to get results would be to eliminate foods that caused the sugar to rise profoundly in other words not always sugar but wheat. A high glycemic indexvalue for a food indicates that it results in a rapid rise in blood glucose levels and hence a spike in insulin response.

What health benefits will you see?

Sleeping and energy will improve,

Rashes and skin conditions get better

Asthma inhalers can throw away their inhalers,

Athletes have a more consistent performance.

You will be thinner, have better bowel habits,

Joint and lung health will improve

Surely it’s worth the trouble?

Therefore wheat products elevate blood sugars more than any other carbohydrate, from beans to chocolate. This has important implications for body weight since glucose is unavoidably accompanied by insulin, the hormone that allows the entry of glucose into the cells of the body, converting the glucose to fat.

The higher the blood glucose after consumption of food, the greater the insulin level, the more fat is deposited.