Sugar Part 2 – The truth behind the business

Home/Sugar Part 2 – The truth behind the business
Previous Next

Sugar Part 2 – The truth behind the business

If we all stuck together and did not eat the processed sugar, cupcakes, cookies, wholemeal bread, smoke cigarettes then the sugar industry would plummet,  It’s big business and big money for them especially as more and more of us become addicted every day. “I will not give poison to anyone”. That is a quaint, old-fashioned idea put forth by Hippocrates, alas, no longer in vogue.

Did you know that cancer feeds on sugar? In fact some tumours have their own insulin receptors and use sugar to grow. What is worse it takes up other tissues and muscles in the body, so in-fact cancer hijacks the sugar from healthy organs.

Sugar gives us a quick bursts of energy that can last a few hours, but this is short lived and we often experience a low afterwards as our digestive system has to use a lot of energy.  Have man made processed carbohydrates at lunchtime at work such as a sandwich,wrap or pasta and notice your afternoon lull. Sugar also disrupts the orexin system in our brain. Orexin is a protein like molecule that regulates a wide range of mental processes, from sleepiness to hungar. People with low orexin levels suffer narcolepsy (the condition where you fall asleep all the time) and obesity. Studies show that mice injected with orexin makes them more active and increases their metabolisim , the low orexin levels make people run down and tired. 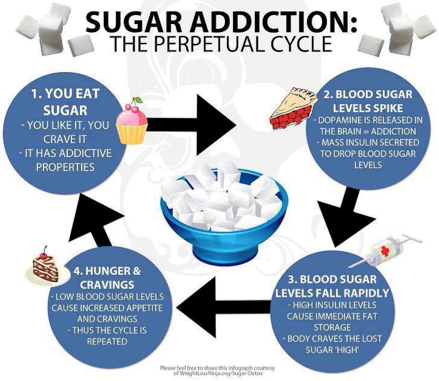 Sugar reduces orexin levels so we feel tired and therefore move less. Meanwhile our weight increases as a result. Conversly a diet rich in protein such as meats, fish and eggs excites orein levels , turning them on and boosts are energy levels.

In the 1970s two vital publications were produced . A British nutritionist and psychologist John Yudkin produced “pure, white and deadly”- in this publication John predicted the obesity epidemic and also the effects of adding sugar.

The secound publication – the seven countries study – showed that the populations of countries consuming the most fat also had the highest incidence of coroneary heart disease.

The information from this study was used by several contries to reduce fat in our diet. This study has since been criticised as research shows that high fat countries like Netherlands have low heart disease and places like Chile which is low fat have a high rate of heart disease.

All the food companies around the world then focus on low fat diets and guess what – the processed food tastes awful without it. So they add the sweet stuff. Most processed foods lack in fibre which makes the food harder to freeze, decreases the shelf life and lengthens cooking time. But fibre is essential as it can prevent heart disease, diabetes , weight gain and some cancers as well as improving digestive health.

With a diet high in sugar and low in fibre it’s no wonder we are all overweight and full of problems.

For years when I was a dancer I believed that fat was the enemy but how wrong I was . We only have to look back to wartime where peoples’ waistlines were thinner as they cooked with lard and everything was cooked from scratch . Diets high in fat don’t cause heart disease, but we also have to look at the source of the fat to be sure it’s safe and right for us with so much hormone pumping in modern farming today.

Glucose can actually be good for us, when consumed we use up 80% of the glucose in the body by our cells, 20% percent passes to the liver, where it is stored for glycogen for energy for the future . Glucose also turns off hunger by stimulating insulin and leptin – a hormone used to turn off our feelings for hunger which also play a key role in regulating energy intake and expenditure. 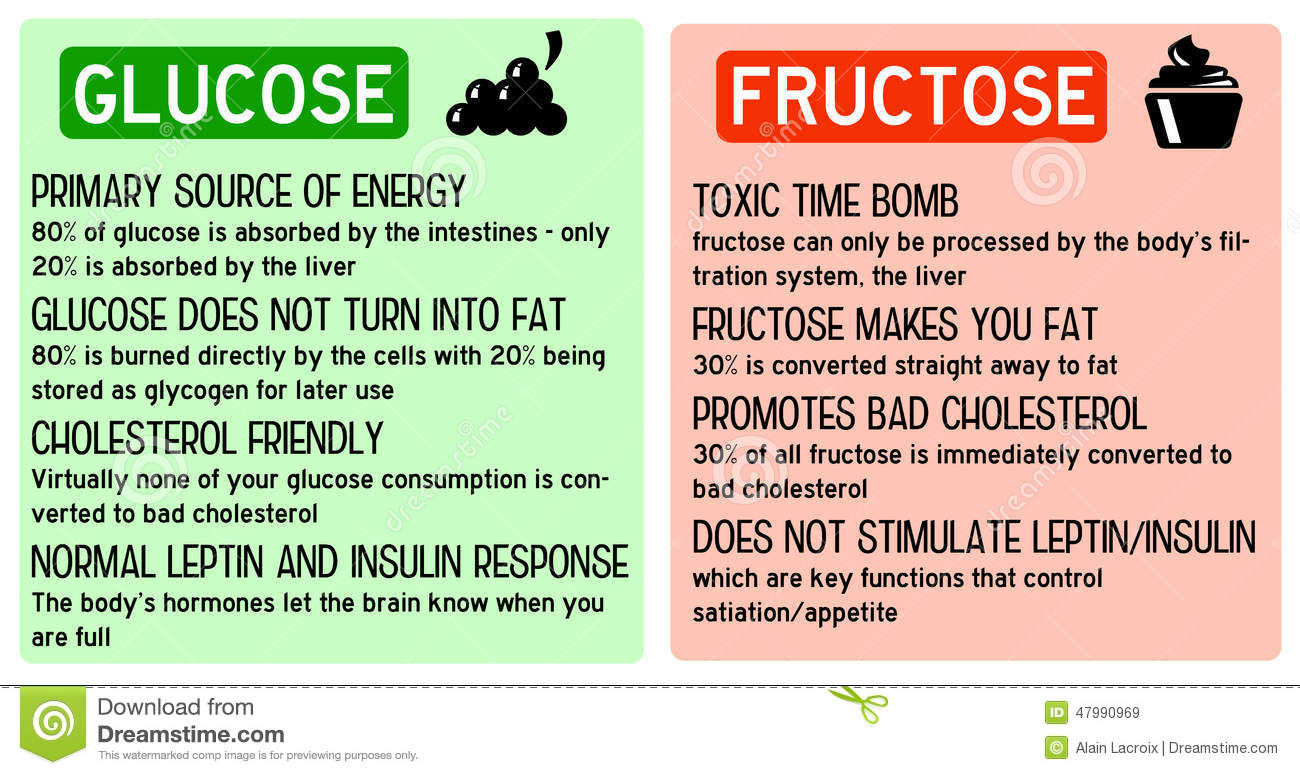 Fructose is the sugar used most in processed foods, fizzy drinks and sweeteners. If it is not used by the cells of our body it is sent to the liver to be processed. It also does not turn off ghrelin, our hungar hormone , which is why some people can eat loads of food and only stop when they feel sick. Fructose also does not stimulate insulin and leptin. In the liver  fructose is tuned into uric acid, the substances that are at high levels cause gout. It also causes blood high blood pressure by blocking the enzyme that keeps blood pressure low. This is how fructose contributes to heart disease, its then processed into fat, which is why sugar not fat causes weight gain.

Have you hear the term angry liver? According to Chinese medicine the liver is associated with anger. Try being around anyone who is recovering from a hangover, their liver will be working extra hard and makes us short tempered or uptight as it overworks to do its job.

The liver processes sugar the same way it does alcohol. Sugar causes 8 out of 12 problems that alcohol does these include high blood pressure, pancreatic, liver dysfunction, obesity, heart disease and high cholestrerol. The sugar addiction can actually pass on to the foetus too and cause foetal insulin resistance . This is why sugar is as addictive as alcohol because the body recognises and deals with it the same way. Strangely the dangers of smoking and alcohol are well documented but not so much sugar . 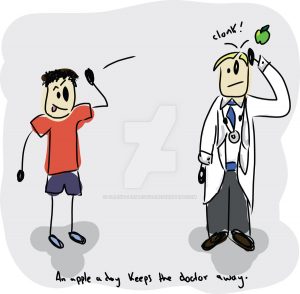 “An apple a day keeps the doctor away“.The fructose in fruit is totally different, let me explain . A studty showed that seven days of high fructose diet increase fat deposits in the liver and the muscles as well as increasing trigliceraides (the bad part of cholesterol). The volunteers drank a solution of 3.5 grams of fructose per kg of their weight. If you weighed 70KG, that means you would have to consume 245 grams of fructose a day to get the same negative effects. If you wanted to get this from bananas , you would have to eat about 35 or 20 apples or 490 strawberries or 600 cherries. The point I am making is that it takes bigger portions of fruit to cause the same side effects that fructose causes , compared with the fructose in fizzy drinks and cakes .

The old fashioned sweetener packets used to contain the following warning ”this product could cause cancer.” A 1970s lab rat study showed an increase in bladder cancer after consuming aspartame . This however has since been disproven by the FDA (food and drug admin). However many people still swear there is a link between aspartame , cancer , fatigue and headaches . This has not been proven either, however the proof lies in the pudding that a reduction in sweeteners improves patients symptoms. 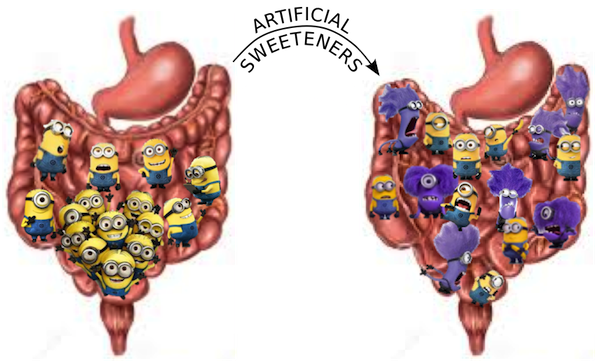 The San Antonio heart study shows that people who drink more than 21 diet drinks a week are twice as likely to be overweight. When sugar receptors are overstimulated less appealing foods like fruit and veg become repulsive. The less nutritional value you have the less vitamins and minerals you will consume and you will be tired .

Sweeteners are addictive, a study on rats showed that when rats were offered both cocaine and saccharin, the rats chose saccharin.

The multi ethnic study of artherscklerosis showed that a dally consumption of diet drinks was associated with 36% greater risk for metabolic syndrome and a 67% increase risk of type 2 diabetes. Considering the purpose of these drinks is to reduce the risk of these condition this becomes a sad state of affairs. It is no wonder that the big diet club chains around the world have poor information constantly promoting diet drinks as unlimited and the results are catastrophic for the innocent consumer. The 2013 medical study ‘Consumption of sweet beverages and type 2 diabetes’ showed the link between sugar induced drinks and type 2 diabetes. They evaluated  the association of consumption of sweet beverages (juices and nectars, sugar-sweetened soft drinks and artificially sweetened soft drinks) with type 2 diabetes incidence in European adults.