Sciatica & piriformis syndrome – A constant confusion & do they exist?

Home/Sciatica & piriformis syndrome – A constant confusion & do they exist?
Previous Next

Sciatica & piriformis syndrome – A constant confusion & do they exist?

First of all, we all love to label conditions whether it’s flu, IBS, rotator cuff, frozen shoulder etc Bear in mind that a lot of labelling are umbrella terms and we have to think of the body as a series of connections. From a fascia point of view, we don’t like labels, what we think is what we become. Where you actually feel the pain may not be its origin and this is known as ‘phlugers law’.

PFLUGER’S LAWS: HOW WE TRANSITION INTO PAIN

LAW OF UNILATERALITY
You hurt where you injured yourself.

LAW OF SYMMETRY
If stimulus to the nervous system is sufficiently increased, you start to hurt in similar muscles on the side other than the one you injured, but you still hurt most where you injured yourself.

LAW OF INTENSITY
As a stimulus to the nervous system increases, the side you didn’t injure now hurts as much as the side of the initial injury.

LAW OF RADIATION
With the continued increase of stimulus to the nervous system, the nervous impulses travel up the spine activating reactions through centrifugal nerves coming from cord segments higher up. In essence, areas of old injuries become reactivated.

LAW OF GENERALIZATION
With intense stimulus to the nervous system, the impulses are propagated to the medulla oblongata, which becomes a focus from which stimuli radiate to all parts of the cord, causing a general contraction of all muscles in the body.

The article below focuses on musculoskeletal, but I feel there is a valued clue that every therapist misses out.  If you feel you have tried everything and still have no luck please get in touch. 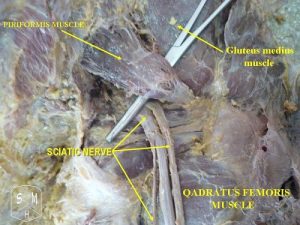 In 15-30% of the population, the sciatic nerve passes through the piriformis muscle, rather than underneath it. These people have been reported by some studies to have a greater incidence of piriformis syndrome than does the general population. In people that sit all day at work, the hip flexors become short and tight and the gluteals are inactive and become weak. This can contribute to the piriformis having to do extra work to compensate resulting in hypertrophy of the piriformis. With an approximately 40% increase in piriformis size, sciatic nerve impingement is inevitable. Then you have piriformis syndrome and sciatic pain. 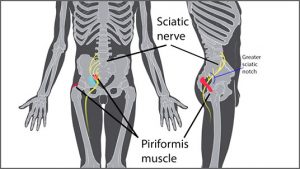 In approximately 20% of the population, the piriformis is split, with 1 or more parts of the sciatic nerve dividing the muscle belly itself. In 10% of the population, the tibial/peroneal divisions are not enclosed in a common sheath. Usually, the peroneal portion splits the piriformis muscle belly, although in rare cases, the tibial division does so.

Piriformis syndrome is also known as “wallet sciatica” or “fat wallet syndrome,” because it is aggravated by sitting with a large wallet in the rear pocket on the affected side. 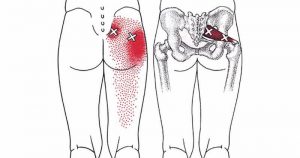 Sciatica refers to irritation of the sciatic nerve, which originates via the nerve roots in the lumbar spine. The most common cause of sciatic nerve irritation or “true” sciatica is compression of one or more of the nerve roots due to disc herniation or spinal degeneration in the lower lumbar region (this is usually age dependent). Severe compression and inflammation of the sciatic nerve may extend the pain into the glutes, thigh, and down the leg to the foot.

Sciatica Piriformis Syndrome, the most common cause of sciatic pain is created when pressure is placed on the sciatic nerve by the piriformis muscle which is situated very close to it. Muscle imbalance is the most common underlying cause of this condition and the resulting sciatic pain. Muscle imbalances pull the hip joints and pelvis out of place (remember, the bones do not move on their own) and this changes the positioning of the piriformis muscle, in relation to the nerve, which then places pressure on the sciatic nerve. The area gets inflamed and then spasms cause pain. Sciatica piriformis can only be really corrected by addressing the cause – typically a muscle imbalance. Just treating the symptoms will not solve the problem. 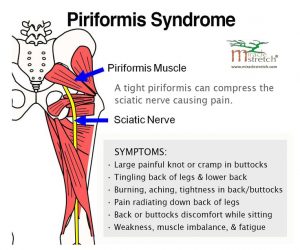 Piriformis syndrome is actually referral pain (tingling, numbness, etc.) caused by tightness in the piriformis muscle. It mimics the pain of true sciatica which is why its often confused with sciatica even by those in the rehabilitation sector. The pain occurs due to compression of the areas surrounding the sciatic nerve. Contraction of the piriformis muscle results in pain in your buttocks and hips due to impingement of the nerve, that may radiate down your legs.

In approximately 20% of the population, the piriformis is split, with 1 or more parts of the sciatic nerve dividing the muscle belly itself. In 10% of the population, the tibial/peroneal divisions are not enclosed in a common sheath. Usually, the peroneal portion splits the piriformis muscle belly, although in rare cases, the tibial division does so.

“Muscle relies entirely for its integrity on the fascia that surrounds it”. Gill Hedley

Piriformis And The Sciatic Nerve

The osteopathic philosophy of “structure dictates function” is very important when talking about the piriformis.  The piriformis has a lot of fascia and nerve innervation so this area of the body needs to be organized accordingly, via pumping, 2TLS, segmental reinforcement and myofascial stretching.  Hiring a therapist that knows how to manually create space in this area and then teach you how to perform the proper myofascial stretching and reinforcement is priceless. We need to understand that one cannot assign one muscle to a specific movement for e.g there are very few books on the market that will refer to the abdominals being connected with the opposite shoulder. Bringing the systems together is a more holistic approach.

Physical examination largely depends on neurological testing. The most applied investigation is the straight leg raising test or Lasègue’s sign. Patients with sciatica may also have low back pain but this is usually less severe than the leg pain. It’s really important that you are assessed rather than attending a pilates or yoga class if you feel you ahve sciatica, as the result could be more damage and a more irritated nerve.

Call me for your free phone consultation and lets put an end to your sciatica.