Every time we move we move our connective tissues will create toque, tension, softness. This can be especially exaggerated and emphasised in such movements as below on the golf swing. Again we are taking our intention and attention to the sales bit everything else is working and is switched on a the term goes. 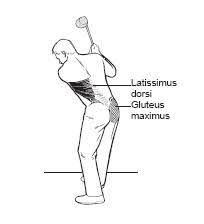 The posterior oblique sling is a cross-body pattern comprised of the gluteus maximus, thoracolumbar fascia (TLF) and contralateral latissimus dorsi muscle, which connects the shoulder with the opposite hip to facilitate locomotion. Dysfunction in this system puts the brakes on power, strength, speed, and performance. 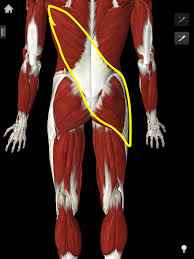 This can be clearly seen in gait pattern on the single stance phase. In the propulsive phase of gait, there is aphasic contraction of the gluteus maximus, which occurs in concert with that of the contralateral latissimus doors as it extends the arm as a means  of counter rotation. this timed contraction  produces tension in the thoracolumbar fascia  that assists in the stabilising the sacroilliac  joint of the stance leg. Vleeming quotes Margaria, who states that the posterior oblique system may act like a smart spring, storing and releasing energy in the thoracolumbar fascia mechanism. this would reduce the metabolic cost of walking .

The posterior oblique system is also crucial during this action in order decelerate the movement when appropriate, using eccentric control. This helps to aid an individual in maintaining their balance during a highly dynamic movement such as this, whilst stabilising the lumbo-pelvic hip complex.