Oestrogen is in everything from our tap water to our daily food chain.  With more and more men showing signs of prostatitis, prostate cancer and man boobs, this is something we need to act upon. High oestrogen contributes to prostate cancer. As the testosterone is transferred into oestrogen, the low levels of testosterone can cause many unpleasant symptoms. Although oestrogen is female hormones there is so much evidence now of prominence in men. The reproductive system is slowly being eroded with an excess of female hormones or chemical interlopes masquerading as female hormones.

Our natural environment is hyper-oestrogen. Symptoms in men are :

When a man has man boobs, it is generally an indicator that they have been eating toxic foods, and/or been in a toxic environment for a long time, or that they have a history of anabolic steroid use. This condition is often related to children being fed soy-based or soy-containing commercial baby food and formulas, as well as commercial pasteurized milk, which also has many other farming chemicals in it that are disruptive to the hormonal system, and toxic to the body.

The body stores all toxins it can’t convert to water-soluble chemicals and excretes it in the fat of the animal or human being until it has the nutrition on board to effectively run the major detox pathways in the liver. Many never get there… It’s what you hear me talking about in class all the time – our superficial fascia layer.

If you consider the length of time you lived an imbalanced lifestyle and ate a poor diet relative to the time you’ve spent ‘clean eating’, I’m pretty sure you’ll see you’ve only been on your clean up project a small fraction of the time you were eating and living unconsciously. (This is not a criticism, by the way, just what is likely to be the facts.) 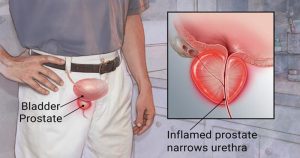 Prostate cancer is the most common cancer in men. One in ten men is expected to be diagnosed with the disease. The risk is age-related: three-quarters of cases occur in men over 65. the highest rates occur in North America and the lowest rates in Asian countries. the UK rates increased by almost 40 % between 1997 and 2006.

Doug Kaufman who has a TV show called ‘Know the Cause’ released a book about prostate cancer, and in his book, he claims that fungal organisms cause many health problems including prostate issues. I took his ideas and put them in my pocket. Afterwards, I started thinking what’s causing fungal overgrowth. According to Paul Chek, famous holistic health practitioner, fungus overgrowth is a result of excess sugars in the system (may be caused by blood Sugar handling issues, poor nutrition or dysbiosis (too much bad bacteria in the gut). Paul says fungus is a part of our healthy intestinal system, and we just need to keep it in balance.

We are conditioned by the medical and drug companies that every little niggle is a drug deficiency. We are conditioned to kill the enemy. However, what is the fungal component has a friendly element to them. All fungal and parasites are opportunists they are mother natures decomposers. Whenever we eat too much sugar or too much of the wrong food, we invite them to the table.

There are three key facts that tell us that cancer is not predominantly genetic. Although a woman who carries faulty genes have a higher chance of developing hormone-related cancer, genetic predisposition is low. For example, 5 % of all female breast cancers are due to genetic defects. These cancers are oestrogen related, but of oestrogen is a natural hormone what is going wrong? 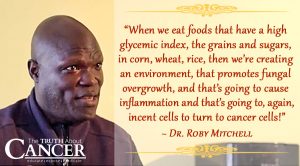 Read my full article here: “Is it prostate cancer or a fungal infection?”.

“I wish I hadn’t eaten that”. Maria Cross