Do females have more neck pain than males?

Every single one of us is an athlete, this is because we came from an environment of hunter/gatherers and we fought to survive, eat, sleep and move. Our skeletal structure has not changed for thousands of years but what has is the new shiny electronic convenient world. Our muscular skeletal system has adapted to the way we move and has steered away development.

“High-level athletes and weekend warriors alike are affected by neck pain. In most instances, athletic neck pain is the result of minor injuries, such as ligament sprains, muscle strains, or soft tissue contusions…Regardless of the origin of symptoms, athletes with neck pain may have deficits in muscle recruitment, strength and endurance, repositioning acuity, postural stability,or oculomotor control. Athletes with neck pain may also have mobility deficits in the cervical and/or upper thoracic regions.”

No matter how much we develop, whether progression or regression there are differences in the male and female athletic ability. Females are more prone to injury at joints and have narrower tunnels in the central nervous system than men. A huge variable is the difference in the neck musculature. Females have less extensor mass so are more prone to neck problems. That is to say there is 30-40% less muscle mass in their cervical area, yet a female head weighs proportionally about the same as a male one.

Our postural patterns follow the modern sedentary lifestyle of driving, sitting and slouching. What happens at one joint will have a knock on effect throughout the rest of the body.

So how can a female’s head percentage be heavier than a male’s?

The hair can weigh a lot, putting chronic stress on neck extensors

A female will also have more headaches. Faulty motor engrams that contain a forward head posture will make the brain tell the body to go to its strongest point; this will never be the weakest. Thus the forward head posture will continue to get stronger. Every inch that the head moves forward the load will double. So a ten-pound head that is forward three inches become s a 30-pound head. This then puts stress on the neck extensors, which is set more by watching TV, driving and sitting at computers and playing on iPhones. The results are poor blood flow through the rest of the human body. The blood flow stats are actually reduced by 75% through the working muscles. So imagine the effort required to a forward headed athlete to that of a neutral cervical neck athlete when moving.

When this lack of blood flow continues we see: 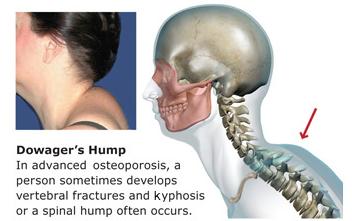 If your head is aching you may have thought it was the weight of your hair or your bobble. This can be contributing factors but it can also be compression of nerve roots at the greater occiput around C1 and C2. As a poor neck position develops the engrams will continue to be embedded deeper. These factors are strong contributors to dowagers hump because the soft tissue will develop and increase as a safety mechanism. So you then continue to work out lifting weights, Pilates, yoga, cycling, running etc. And your neck pain is worse than ever. I always get enquiries from people telling me that their exercise regime or pilates or yoga is making their pain worse.

A good physical or manual therapist should be able to recognize that this can come from incorrect loads at other major joints and it can be assessed from your squat pattern and thus show your ability to keep your cervicle neck in line . To read more on squatting click here:

“It has also been suggested that cognitive or emotional processes play a strong role in the genesis of neck-related disability, such as depression and anxiety or pain catastrophizing which may intervene in the relationship between structural pathology and disability. Given that no one mechanism appears to explain all variance in self-reported disability, it is clear that neck-related disability is not a unidimensional construct but must be appreciated from a variety of perspectives across different disciplines. Not the least of which is the patient’s own perspective of their condition.”[3]

“Equal but not the same “ Paul Chek