When thinking about core stability we must think about everything in the body in particular the extremities aka arms and legs. You may have an ankle injury, lower back pain and this could be stemming from the lateral system. 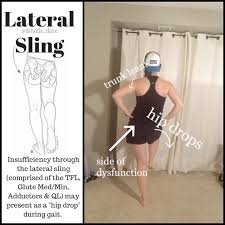 The lateral system provides essential frontal plane stability. this is accomplished  by a force couple  action between the glut medius and minimum , pulling the iliac crest towards the femur while the opposite quadrates lumborum and abdominal musculature assist by elevating the ill. This is needed for us to have space in the swing leg during gait.

It is best explained and viewed as when we walk upstairs or a step class. it is a vital component for stabilising in frontal plane. It provides stability that not only protects the spine and hips. Should the trunk become unstable , the diminished stability will compromise ones ability  to generate the forces necessary to swing the leg quickly.

Shirley Sahrmann described the lateral  shift  of the athletes  centre of gravity over the subtalar joint  whilst going through the stance phase of gait (trendelenberg sign) resulting in an inversion ankle sprain. Also glut med weakness and contralateral low back pain due to quadrates lumborum  overload, common among those exhibiting  reoccurring ankle sprain.