How to handle the emotion anger

Home/How to handle the emotion anger
Previous Next

How to handle the emotion anger

As the Buddha put it ‘ Holding on to anger is like grasping a hot coal with the intent of throwing it at someone else, you are the one who gets burned’. Anger is completely normal, usually a healthy emotion. When it gets out of control and turns destructive, it can lead to problems at work, personal relationships and effect the quality of your life.

So in spite of Buddha’s warning we can learn to harness anger skillfully and wisely. We all know this is a difficult task. As Aristotle said “Anybody can be angry with the right person to the right degree and at the right time and for the right purpose and in the right way – That is not within everybody’s power and is not easy’.

‘Anger is probably one of the mostly debated basic emotions, owing to difficulties in detecting its appearance during development, its functional and affective meaning (is it a positive or a negative emotion?), especially in human beings.’1

Observe this phase: “If listened to carefully and observed skillfully”. We must listen cautiously, because engaging with anger is rather like kindling a fire, it a potent force and while it can be useful if channeled well, it is more likely to be chaotic and destructive, and you might be the one who suffers the most. A person who is angry and complains at everything and everyone reflects the way they actually feel about themselves. The opposite of love is not hate , it’s apathy or indifference. If we hate or are angry at someone or something, we actually carry them within us at all times. Again, the opposite of hate is not love, its apathy or indifference. Apathy/Indifference means lack of interest, concern, or sympathy. 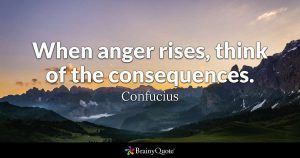 Some anger produces nothing more than destructive aggression and therefore needs to be controlled and muted. But we shall also see that, if listened too carefully and used skillfully, anger may have a moral compass that’s directs us to a brighter future. Righteous anger can inspire social change and ultimately create a more just society. Even if change is slow to manifest and the struggle can seem never ending, there is value in the campaign, working with others in service of a higher ideal.

Anger is neither warranted nor justified. Sometimes fate ruins our day. No one is at fault, so there is no justice to be rectified. The bus you’re on blows a tyre on the way to work and you miss that important meeting. Of course this is not a moral iniquity, so it does not merit anger. In such instances you need to make peace with that day and the dice was loaded against you. 10% in life is what happens to us, 90 % is how we react.

Medical papers show that a practice of yoga and meditation will reduce our anger and reaction. The pub med 2016 study found that just one session of meditation reduced the physical signs of anger, even in people new to meditation. Researchers examined 15 people new to meditation and 12 experienced meditators and measured their physical responses, including blood pressure, breathing rate, heart rate. Both groups were asked to relive experiences that made them angry.Anger in people who were new to meditation raised their heart rate, blood pressure, and breathing rate. But after only 20 minutes of meditation, people who had never done meditation before had a much calmer and more relaxed physical response when asked to re-experience anger. 3 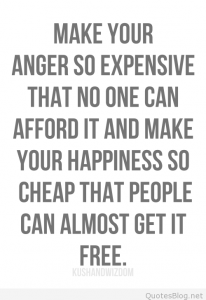 Try to remember the last time you were angry, it may be you felt provoked by something deeply wounded, like a loved ones betrayal. Or it might be sparked by something far more jovial, such as the sheer frustration of being stuck in a traffic jam, or your computer crashing, wiping away hours of work. The anger ignites sparks of rage, bubbling up inside with great energy, an explosive force, yearning for vengeance and ready to burst forth with violence. We see this all the time with road rage.

Firstly all anger is not moral. Sometimes we get angry as life and our desires are not going the way we want the too. In such cases it is better to speak of such things as frustration, rather than anger. This is the prickly irritation that we feel when we are stuck and seemingly helpless be in the face of unending traffic or a slow laptop. Like a child we stomp our feet as if the universe may align more to our needs.

Our first lesson is that anger may show us that we are to0 sympathetic dominant, it can generate some useful insights and embarrass us into admitting that we lack patience and acceptance and cause us to join a mediation class in order to cultivate those valuable qualities. It may encourage us to re think our commute to work and travel by a different route. You’re the one who controls the volume.

Since Darwins pioneering travels ethnologists have understood that we need some named emotions in order to survive and communicate between co-specifics. The ritualisation of instinctive behaviours of fixed patterns of facial expressions, postures, and gestures was thus believed to serve as a message signalling other members of groups of ones intentions. For instance the display of teeth precedes an attack, a ritualisation of a smile.

Our second lesson is even more important. When anger begins to froth and simmer with explosive potential, it is essential to use the energy skillfully and channel it towards making it better. This demands deliberation and care. By lashing out aggressively in an unthinking relative way. Crude anger if directed in a wrong way can release our inner thug. If we hold onto unhelpful anger I also harbor more regrettable impulses, inner demons and agitate for destruction, hate. If this happens the anger turns into hateful fire and violence.

Ricardo williams tells us: ‘Behaviours accompanied by anger and rage serve many different purposes and the nuances of aggressive behaviors are often defined by the symbolic and cultural framework and social contexts. Nonetheless, recent advances in neuroscientific and developmental research, as well as clinical psychodynamic investigation, afford a new view on the role of anger in informing and guiding many aspects of human conducts. Developmental studies have confirmed the psychophysiological, cognitive and social acquisition that hesitate in the pre-determined sequence appearance of anger and rage in the first 2 years of life.‘ 2

Name them, Blame them , Tame them –

‘When evil thoughts arise in your mind, no matter where they come from, name them. The act of naming brings something up from the unconscious to the conscious, where you can effectively work with it. Otherwise, the process just keeps repeating itself and can lead to a person actually believing their own thoughts, even when they are disempowering or dangerous to one’s self or others.

When negative or evil thoughts are named, blame them for the way you feel when you allow yourself to think or believe them. For example, “I think that I’m stuck in my life, I feel defeated, weak, afraid, unhappy.” That allows you to become “conscious/aware” of the creative powers of that thought.

When you are aware of what thoughts create within you, state your dream as it relates to those thoughts so you can tame them. For example, “Dream: I am a powerful, loving, capable human being and I use this time to master my mind to live and love more fully.” This allows you to create new neural networks (neurons that fire together wire together).

By not allowing yourself to fall into the trap of believing those negative thoughts, you progressively disable those neural networks, so those thoughts eventually cease to exist.

As a result, you can have real empathy for people who haven’t learned the skills I’m sharing with you, and you’ll realize that you have something very powerful and beautiful to share with others.’ – Paul Chek

Let your anger drive you to become the most loving person you can be and become everything you were not.

‘Anger as a Basic Emotion and Its Role in Personality Building and Pathological Growth: The Neuroscientific, Developmental and Clinical Perspectives’ Ricardo Williams  – NCBI 1,2