Help my child has Autism!

Home/Help my child has Autism!
Previous Next

Help my child has Autism!

Autism is on the rise, so many parents and colleagues are telling me that their child has Autism. EVERY one of us is on the autistic spectrum: We all experience key symptoms ‘just to varying degrees’.

Apart from childhood learning disabilities autism, ADHD/ADD, dyslexia, dyspraxia and various learning and behavioural problems all are connected with our gut. These include conditions such as schizophrenia, depression, eating disorders, manic depression, bipolar, eating disorders and obsessive-compulsive disorders 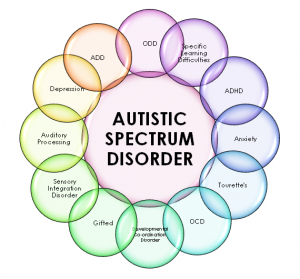 As illustrated by the graph below, the basic symptoms of autism are often accompanied by other medical conditions and challenges. These, too, can vary widely in severity. There is great evidence for food allergy as a major contributor to symptoms, especially allergy to gluten, grains, and milk. This is even higher with children with ADHD. In 1998 Dr.Andrew Wakefield, a consultant gastroenterologist at the Royal Free Hospital in London published their research showing the connection between IBS and autism. This was done by his team using endoscopy. Firstly they looked at the tissue liquid (lymph) coming from the ileum and removed bacteria, viruses, fungi, dead cells including cancer cells)and various toxins from it. Secondly, they looked at the enlargement of these lymph nodes which is called lymphoid nodular hyperplasia. These nodes are inflamed and can sometimes be painful.

Because many of these children have developed autism after the MMR vaccine, this is the direction that was pursued by Dr.Wakefield. When looking at inflamed lymph nodes he suspected that there was a link to measles. He involved Dr.Oleary a professor of pathology at Dublin. Sure enough, Dr.Oleary has found that the same measles virus used in the MMR vaccine as in the inflamed nodes of autistic children. This research caused a lot of controversies from the government and medical establishment who tried to steer the attention away from the main issue. The main issue found is that autistic children have enlarged lymph tissue due to a fight and infection going on in there.

The second condition noticed in these children was colitis. Colitis is inflammation of the colon. Dr.Wakefields endoscopies showed that these children had inflamed gut walls, erosions of the mucous membrane of the colon and intestines, abscesses filled with pus, ulcers, and plenty fo faecal compaction. In some places, the gut wall was so inflamed with such enlargement of the lymph nodes, that it almost obstructed the lumen of the gut. In some cases, the inflammation resembled ulcerative colitis and in some Crohns. 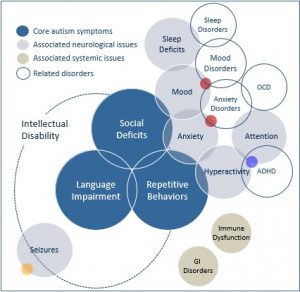 Much of the intervention has come from parents who noticed the vast improvements in their behaviour after changing their diets. Wheat and dairy contain gluten and casein- these are the foods most strongly linked to autism. These proteins are difficult to digest especially if introduced too early in life, resulting in an allergy. Fragments of them are known as peptides, can mimic chemicals in the brain called endorphins, so they are often referred to as ‘exorphins’.

The most common food allergies in autistic children are :

French Psychiatrist Phillippe Pinel (1745-1828) concluded in 1807 “the primary seat of insanity lies in the stomach and intestines”. Yet the last thing that any psychiatrist would pay attention to is the digestive system.

Autistic children can have fussy eating habits, refusing whole lots of foodstuffs and limiting their diet to a handful of foodstuff usually starchy and sweet, breakfast cereals, crisps, chips, popcorn, cakes, biscuits, sweets, bread, rice and sweet yoghurts. Most of these children will refuse to have vegetables, apart from bananas and sweet yoghurts.

Recognising your child’s toilet habits are key, diarrhoea and constipation are frequent plus seeing undigested food in the stool. The stool can often have a strong unpleasant smell and other times be liquid and acid like burning the child as they pass it. If the stool floats and is pale this indicates undigested fats. Constipation is also a sign and sometimes the children won’t pass a stool for 5-7 days. The children take odd sitting positions and postures comfort. Pronounced flatulence is often followed by self-destruction, tantrums and refusing to eat as the child cannot express or explain what is going on.

Think you need help, get in contact or find your local CHEK practitioner.