Fibromyalgia, serotonin & repressed anger – Is there a link?

Home/Fibromyalgia, serotonin & repressed anger – Is there a link?
Previous Next

Fibromyalgia, serotonin & repressed anger – Is there a link?

I am raising the question today is there a link between GIT (gastrointestinal tract), serotonin, IBS and repressed anger that could be triggering fibromyalgia. Although there are many possible causes of fibromyalgia, what can be certain is that all of the possible causes are a direct result of a cascade of disturbances and resulting malfunctions. Chronic fatigue, chemical sensitivity, fibromyalgia and many other so-called “chronic diseases” are not different diseases, but the result of similar cellular malfunctions manifesting differently in different people because of different genes, diets, toxic exposures, lifestyles, beliefs, emotions and life experiences, in other words, …stress! The NHS estimates that 2-4.5% of people in the UK may have fibromyalgia syndrome – based on a UK population of 61,414,062 (figures from 2008 from the World Bank), this would mean that between 1.2 million and 2.8 million people in the UK would have fibromyalgia syndrome.

So what is fibromyalgia and how can low serotonin be a common factor?

Fibromyalgia is recognized as a chronic condition that causes intense pain in various places around the body, including muscles, connective tissues and joints, as well as a host of other symptoms. At least ten million Americans, mostly women, suffer from it and research has shown that fibromyalgia is a condition that is unquestionably associated with low serotonin! Raising serotonin levels not only has a powerful muscle-relaxing effect, it can also powerfully stimulate our natural painkillers, the endorphins!

Fact – “serotonin is well known as a brain neurotransmitter, it is estimated that 90 percent of the body’s serotonin is made in the digestive tract”. 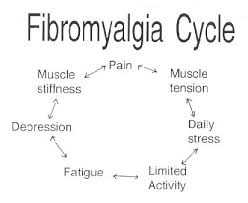 Fibromyalgia is usually treated by rheumatologists but since co-morbid depression and anxiety are frequent, psychiatrists are likely to be confronted with patients suffering from the syndrome. The symptoms associated with fibromyalgia vary from patient to patient but there is one common symptom-they ache all over. In addition to pain, patients report headaches, poor sleep, fatigue, depressed mood and irregular bowel habits, which are also all symptoms of depression. Now, of course, fibromyalgia can have other causes, too, including low thyroid, it usually responds very well to amino acid therapy. It must also be observed that low thyroid has been shown to be secondary to adrenal fatigue as cortisol blocks the conversion of T4 to T3, so when considering how to treat fibromyalgia it only makes sense that we observe the destructive nature of adrenal fatigue.

Increased cortisol to DHEA ratios are a result of chronic stress. Chronic stress places the body in a sympathetic state, otherwise known as “fight or flight,” which further places increased demands on each and every system of the body, including the ability of the body to repair and restore musculoskeletal health.  This vicious cycle, repeated day in and day out, creates inefficiency in the body, and nutrients that would have been used for one process are now doing the work for two.

Each one of us has a genetic potential when it comes to managing stress (nutritional, environmental, emotional, financial, physical, etc.) however, once we have met that genetic potential the body is no longer able to keep up with the demands placed on it.  When this happens we become catabolic (tissue breakdown) while our anabolic (tissue build up) processes are suppressed.  When we do not understand what stress is or how it affects us, it becomes obvious, as to how and why, so many are experiencing symptoms of chronic fatigue, musculoskeletal pain and dysfunction, sleep disturbances, gut and immune system dysfunction, fibromyalgia, etc.

Precious serotonin is synthesized in your body from tryptophan, an amino acid (protein building block) found in foods like turkey, beef and cheese. Tryptophan first converts to a substance called 5-HTP, which then converts directly into serotonin.  This crucial three-step process can be short-circuited by a number of things.  For example, if there is not enough tryptophan in your diet – a problem for many of us- your body cannot manufacture enough 5-HTP or serotonin.

Now that we know that few foods contain 5-HTP or serotonin themselves, maintaining a sufficient supply of tryptophan is where it can get tricky as our food supply is no longer what it once was.  Tryptophan is found in high protein foods like turkey, beef, pork, dairy products, chicken and eggs; but in proportion to the other 21 amino acids that compose protein foods, it is the runt. In addition, what animals are being fed these days is magnifying the issue.  Rather than the grasses and other plants that wild animals once grazed on, our modern stock-yard animals are now fed low-tryptophan grains like corn.  This serves in fattening the animals in record time but the meat from these animals is much lower in tryptophan.  This is why CHEK practitioner always recommends grass fed or organic food sources. We should always loo at the food source rather than what the food is. To compound the problem, we humans have increased our consumption of low-tryptophan, grain-based carbohydrates like bread, pasta, corn, cookies, and so on, further diminishing our access to tryptophan! Read my wheat article here: 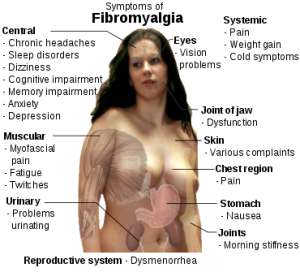 As expressed earlier, there are several factors that can lead to fibromyalgia. Being able to identify and manage personal stressors and other factors that deplete serotonin, as well. Other factors that effect the hormonal pathways, either on your own or working together with your local CHEK Nutrition and Lifestyle Coach, you can then begin to identify your deficiencies and create a plan geared towards restoring optimal functions to all systems of the body.

Stuffing her anger made Vera’s fibromyalgia more acute and distressing

Dr Bradley described environmental triggers that may also be involved in the pathophysiology of fibromyalgia, especially in combination with other risk factors. These triggers include mechanical or physical trauma or injury and psychosocial stressors.

Vera’s struggles in talking about her anger and stress as a child and now as an adult make it more likely that her experience of pain when the fibromyalgia flares up will be more intense and debilitating. The European Journal of Pain, 2010 reported a study comparing female fibromyalgic sufferers who expressed versus those that repressed their anger. The greater the inhibition of anger the greater the experience of pain in women with fibromyalgia. Those who got angry and expressed it in the situation in which it was aroused experienced the least amount of pain. 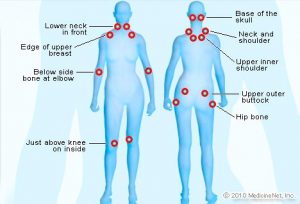 When compared to healthy women, those who avoid strong negative emotions like anger and let it fester unprocessed are more likely to suffer fibromyalgia. In addition, focusing on positive emotions does not appear to be a sufficient buffer. According to a report in the 2008 Journal of Psychosomatic Research, it is the lack of processing of negative emotions that precipitates the cycle of pain in fibromyalgia sufferers irrespective of the amount or duration of positive thoughts. Vera wasn’t more sensitive than most women to negative emotions like anger, but she experienced them more often and never learned to express them in a healthy way. It compromised her neuroendocrine functioning, lowering her pain threshold both physically and psychologically, suggests a study on women with fibromyalgia published in Arthritis Care and Research, 2010.

Fibromyalgia is linked to chronic childhood stress and conflict with parents

Vera was typical of most adult women with fibromyalgia that has had stressful childhoods as reported by the Journal Stress and Health in 2009. Vera’s experience of verbal and emotional abuse from her mother and the uncaring attitude of her father is another common thread in the life histories of women with fibromyalgia. Vera’s struggles with her mother and now her husband made her view life through a more negative lens. Conflict with parents and later with partners adds to the stress and contributes to the more negative perceptions of life by women with fibromyalgia as indicated by the journal European Psychiatry in 2000. 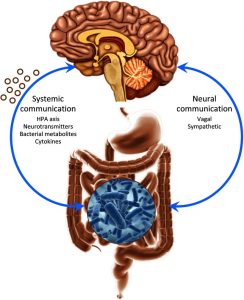 Long-term stress that is continuous and chronic affects the neuroendocrine system making it less effective over time. Vera’s childhood trauma created a permanent sense of uncertainty and unpredictability that impaired her ability to develop and use healthy stress management strategies. So with each new stress, her neuroendocrine system got weaker and began functioning in an abnormal way. She lived in a constant state of stress such that her levels of stress hormone such as cortisol were elevated years after the stress of living with her parents was removed. Despite the struggle of living with a man who was argumentative and unsupportive, it was nothing compared to her previous stressful experiences. The early chronic experience of stress appears to exert a much larger influence in contributing to the pain of fibromyalgia than any current stressful life event, as a 2006 study reported in the journalPsychoneuroendocrinolgy.

Processing negative emotions can reduce the pain of Vera’s fibromyalgia

Vera may not be able to change her history or her husband. But she can begin to process her emotions in her support group and supplement it with psychotherapy.  She can share her anger about her early life, as well as her fear of being helpless and alone in pain. She can take the pressure off her already overwhelmed neuroendocrine system by acknowledging, naming and expressing her feelings at the moment. A study in Arthritis Care and Research, 2010 suggests that Vera can expect between 50%-70% improvement in functioning and feel less pain if she does so.

We can help and support you with the right movement sequence and CHEK lifestyle to help relieve your symptoms, call now for your free phone consultation.

NCIB -The psychiatrist confronted with a fibromyalgia patient.Kasper S1.

The journal of clinical Phschiatry -Understanding Fibromyalgia and Its Related Disorders