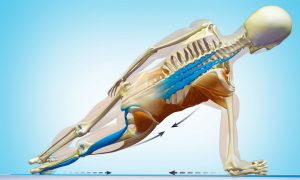 The Deep Longitudinal Sling is made up of….

Together these muscles work as stabilizers of the hips and core. This is mainly seen as we walk, these muscles absorb energy from the ground and transfer it up the body. Where the energy being set up will dissipate before reaching the head if the core is acting properly. 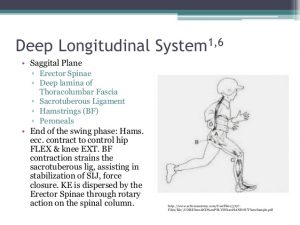 A way of understanding this is to look at our walking, wen w walk we have low activation of the inner unit which in turn provides enough stiffness to protect the joints and provide support for the outer units. On walking when we swing one leg forward there is a counter rotation with the opposing arm. prior to the foot strike the hamstring becomes active. the deep longitudinal system uses thoracolumbar fascia and paraspinal muscle systems to transmit kinetic energy above the pelvis while using the biceps hamstring as a communicator between the pelvis and lower limb.

The Biceps Femoris has a special value in the stabilization of the hips. As the Biceps Femoris is contracted the sacrotuberous ligament is pulled down with it. This forces closure of the Sacroiliac Joint (SI Joint). Dorsiflexion of the foot activates the biceps femoris just prior to heel strike therefore serves to ” wind up” the thoracolumbar fascia mechanism  as means of stabilising the lower extremity and storing kinetic energy  that will be released in gait.