Over the next four weeks, we are going to look at the sling systems. The movement patterns I show are Pilates focused and there are many other ways of training the slings. We purposely take our intention and attention to specific areas of the body.

Slings (also referred to as chains and/or loops) are a functional component of the musculoskeletal system. If we think of our torso as a core cylinder, there are multiple slings that wrap around the cylinder in different orientations. The cylinder depends on strength and balance from the slings to provide a stable foundation. 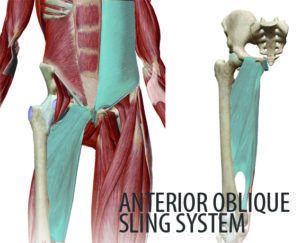 To clarify the point the movement originates in the spine (core). Serge Gracoversky describes the torque generation be an S-shaped spinal column. He exemplifies the point that the legs are no responsible for gait but the spinal engine. It is indeed evident that the kinetic and potential energies of the oblique abdominal musculature, in concert with core muscles are primarily responsible for creating the torque that drives the spinal engine, the oblique abdominals bring teh best situated to create torque. 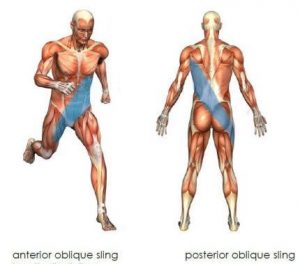 Many of the Rugby teams that I worked with did alot of sand dune training. The sand will give rise to abdominal fatigue over the next few days this is due to the increased action of the AS due to loss of kinetic energy. Serge Gracoversky states that wearing soft-soled shoes such as trainers which actually disrupt the body’s timings and mechanisms. I make everyone train in toe socks and barefoot, this brings more awareness and more proprioceptive feedback to the client of what is going on in the body and around.